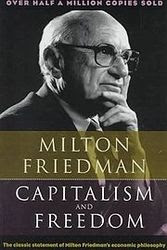 Written by the Nobel Prize winning economist, Milton Friedman, Capitalism and Freedom outlines the classical liberal (today called the Libertarian) economic argument against government intervention in the roles of business and personal freedoms.  While most of the arguments posed in the books are not, from a philosophical perspective provably "valid" through deduction, they are compelling from an inductive perspective.  I recommend anybody who votes at least read this book to understand the negative implication of increased government intervention means in our lives whether a socialist or a capitalist.
Posted by David Ron at 11:31 AM