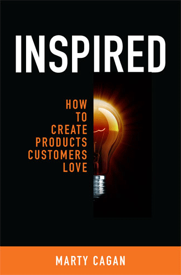 This book is a collection of blog posts cobbled together into a book that has no real thesis and often contradicts itself.  This contradiction is dangerous because it emphasizes putting creative control of the product in the hands of those with titles containing "UX" and "Product" and devalues the creative and innovative capabilities of the rest of the orginization.  Due to this centralization of roles and internally inconsistent nature, it could be treated like a religious text where the high priests of Product can cherry-pick whatever ideas they want to build any product they imagine so long as they can get customer to say it makes them happy.

The advice in this book isn't bad, per se, it just isn't great.  The author, Marty Cagan, takes the waterfall model of product design and extends it into product, defining a dozen or so different specific job titles and outlining when those titles are necessary in what phases of a project.  Unfortunately, in a highly creative and collaborative environment, this advice could potentially slow down development of a product and stifle the creativity of people who can do more than exist in their pre-defined roles.  Worse, he doesn't appear to understand the creativity of engineering and what kind of innovation takes place in the technical side of the product development lifecycle.

Let's take a look at the closest thing I could find to a short thesis in the way of a summary of how to better run a startup.  It's basically a copy/past of this blog post into the book.

Here’s how it typically works. Someone with an idea gets some seed funding, and the first thing he does is hire some engineers to start building something. The founder will have some definite ideas on what he wants, and he’ll typically act as product manager and often product designer, and the engineering team will then go from there. The company is typically operating in “stealth mode” so there’s little customer interaction. It takes much longer for the engineering team to build something that originally thought because the requirements and the design are being figured out on the fly.
After 6 months or so, the engineers have things in sort of an alpha or beta state, and that’s when they first show the product around. Things rarely go well in this first viewing, and the team starts scrambling. The run-rate is high because there’s now an engineering team building this thing as fast as they can, so the money is running out, and the product isn’t there. Maybe the company gets more funding and a chance to get the product right, but often they don’t. Many startups try to get more time by outsourcing the engineering to a low-cost off-shore firm, but it’s essentially the same process with the same problems.
Here’s a very different approach to new product creation, one that costs dramatically less and is much more likely to yield the results you want. The founder hires a product manager, a product designer, and a prototyper. Sometimes the designer can also serve as prototyper, and sometimes the founder can serve as the product manager, but one way or another, you have these three functions lined up - product management, product design, and prototyping – and the team starts a process of very rapid product design and iteration.
I describe this process in detail in “How To Write a Good PRD,” but there are two keys: 1) the idea is to create a high-fidelity prototype that mimics the eventual user experience – it’s just fine if the back-end processing and data is all fake; and 2) you need to validate this product design with real target users.
In this model, it is normal to create literally dozens of versions of the prototype – it will evolve daily, sometimes with minor refinements and sometimes with very significant changes. But the point is that with each iteration you are getting closer to identifying a winning product. This process typically takes between 3 weeks and 2 months, but at the end of the process, you have a) identified a product that you have validated with the target market; b) a very rich prototype that serves as a living spec for the engineering team to build from; and c) you now understand at a much greater degree what you’re getting into and what you’ll need to do to succeed.
Now when you bring on an engineering team, they’ll start off with a tremendous advantage – a clear understanding of the product they need to build and a stable spec – and you will find that the team can produce a quality implementation much faster than they would otherwise.
This model of prototype-based product experimentation is increasingly becoming the norm in the manufacturing world, but for some reason this hasn’t taken off in software. I think we’re such an engineering-driven culture that we just naturally start there. But any startup has to realize that everything starts with the right product – so the first order of business is to figure out what that is before burning through $500K or more in seed funding.
I believe this model applies beyond startups to much larger companies as well. The difference is that bigger companies are generally able to underwrite the several iterations it takes to get to a useful product, but startups often can’t. But there’s no reason for the inefficiencies that larger companies regularly endure.

Allow me to nitpick this idea.
I think #7 and #8 are the most important problems with Cagan's thesis.  First, it's unfounded and inaccurate, and second, it's a hypothesis that the author himself hasn't appeared to have tested (or at least he doesn't state he has any experience testing this theory).  Finally, it appears to contradict advice he gave earlier in the book and taken from a different blog post:

Maybe the biggest missed opportunity in [old-school product management], is the fact that engineering gets brought in way too late. We say if you’re just using your engineers to code, you’re only getting about half their value.  The little secret in product is that engineers are typically the best single source of innovation, yet they are not even invited to the party in this process.

Which I whole-hardheartedly agree with, speaking as a self-promoting engineer.

Cagan measures the success of a product based on customer happiness, but he never shows how to measure happiness.  In fact, he never shows how to measure anything.  The word data-driven doesn't appear in the book once.  Granted, a very important way to measure the success of a product is to simply ask customers if they are happy, but even Cagan conceeds that simply asking customers isn't the best way to get requirements from them.  Early on in Google's life, they tried to sell their search technology to Yahoo.  Yahoo didn't want to pay for it because search was considered a solved problem and users already loved Yahoo.  Google had measurably better technology, but no users loved Google, so Yahoo passed.  Upon launching, Google didn't simply ask users if Google Search made them happy.  It measured every time people navigated to the second page of search results and considered that click a "failure" of the search.  Google set a goal to reduce the average number of "next" clicks per search every year.  This allowed Google to innovate in a scientifically measurable way and stay ahead of the competition even though users already loved Yahoo.  True innovation isn't simply putting a fresh coat of paint on a mediocre product or giving the user a horse that's easier to ride.  True innovation happens when creative people solve an important problem using a solution everybody else thinks is impossible or dumb.  The best innovation, rarely developed through UX, is disruptive.  The first automobile was considered slow, difficult to operate, and expensive to maintain compared to the horse.

Cagan's approach is a great way to take a waterfall organization building mediocre products to another level.  But, he isolates the creative process to the few people with the right job title and gives them the tools of subjective psychology-driven decision-making.  The customer may end up loving your product, but it won't necessarily be the best product you could have built.
Posted by David Ron at 3:10 PM